THE MILLS CEMETERY, GARLAND, TX-WHAT HAPPENED TO THIS FAMILY IS UNTHINKABLE!-RE-POST

I wanted to do a re-post on the Mills Cemetery just because I really like this place and I really liked the spirits I encountered here.  Also, it reminded me of the devastation that Canton, Tx experienced this last week-end.  The small community of Canton which is about an hour East of Dallas was destroyed by an F4 Tornado which stayed on the ground for 51 miles!!!  In its path it crossed the small town as well as a major highway where cars were completely caught off guard.

This is a small community with limited resources so please if you can find a way to help the people of Canton, please do and keep them in your prayers.
To donate

Thank you in advance and enjoy this weeks post. :) 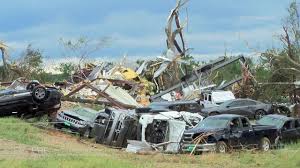 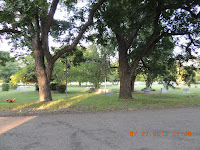 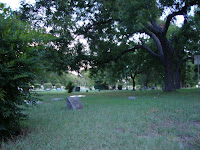 As I got out my equipment, I began walking across the cemetery and found the Smiley site fairly easy.  Now, let me tell you what I have heard about the Smiley family.  One story is...... that Mr. Smiley went crazy and killed his entire family then himself and now he wonders the cemetery at night looking for his next victim.  Another story is that if you lay down on the ground in front of the headstone on Halloween you won't be able to get up or you will feel Mr. Smiley grabbing you trying to pull you down.  And then there is the story.....that back on May 9, 1927 the Smiley family came to their untimely death when a tornado tore through Garland which was devastating and is now referred to as the great "Garland Cyclone".  Seventeen people were dead and five of them from the same family......The Smiley's. 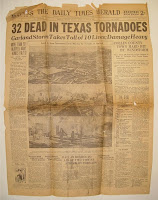 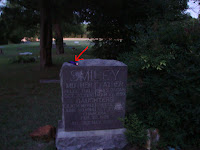 So I sat my recorder and flashlight on top of the tombstone and sat down in front of the Smiley's with my Dr. Pepper in hand and began just talking to the family.  I had EXCELLENT flashlight communication and not anything I think  is really to impressive on EVP's but I am going to go over my data again and will let you know if I find something else.  Here is a brief clip of my flashlight session with THE GIRLS(daughters).  Now, I don't want to hear ONE comment on the singing..... It was just me and the girls at this point....I wanted to do something with JUST them because I feel maybe lots of questions are directed to Mr. and Mrs. Smiley.  I did ask Mr. Smiley if it "upset him" about the things written about him and I even read him three articles written on his family.  The response was very clearly a "YES" it upset him about the bad things he had supposedly done.  I also found out Mrs. Smiley is VERY close to her daughters and loves to cook. :) 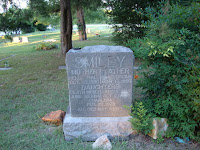 Now, I have ALWAYS been honest with my readers and I try to tell it "like it is" or at least the way I see it........so I am going to do that again.  Guys....and gals.....lol.....we ALL want to have a great paranormal experience BUT in the process we have to get the FACTS right!!!  I feel compelled to say this (especially after my session with MR. SMILEY).....people by no fault of their own....easily repeat what they hear......such as......that ol' house on the hill is sooooo haunted because you can see lights in it at night....when the REAL story is YES you do see lights in the house at night because a family bought the house and are doing repairs at night and don't have the electricity turned on yet.....or........don't go there because the BIG EVIL GHOST will get you!!!!  Anyway....you get my point.  Here are the FACTS on the Smiley family as I know them.  The Father, Mother and three daughters did die in a tornado on May 9, 1927 while they slept in the early morning hours around 3am.  One daughter did survive.  That's it folks.  That's the story.  So, I am putting myself in the families shoes.  I wouldn't like people going around saying that a relative of mine MURDERED his family and then KILLED himself when the painful true is soooo different.  So, lets be respectful of that. A good Ghost Hunter reports his/her finding based on facts NOT Legends.   IF Mr. Smiley wonders the cemetery at night......it is my guess it's NOT because he is looking for his next victim.......it is because it's a WONDERFUL place to take a night stroll and enjoy the fresh air. :) That's MY TWO CENTS :) 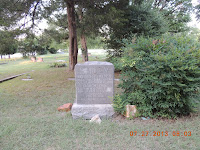 Rest in Peace and thanks for the visit.

So what do you think? Agree? Disagree? Or just want to make a comment... please do.